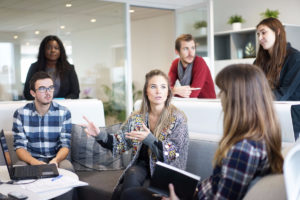 Business across industries have to addressed the fact that women and men respond differently to the sales pitch, the way they are addressed, and the information they received by the sales people.  We all know sales people are doing their job, and that they have to “pitch” their products and services.  We – as employees ourselves-know they have to do a job.  But, the way they do it can be pivotal to the sale.

When female customers call a company for a free consultation for a home project, and the company asks whether they are married or not, or that the male of the house needs to be present for them to come over, it sends a message that perhaps women cannot make a decision or worse yet, they cannot possibly understand their “lingo.”

For any big or small company doing business in the United States, it pays to consider this: A 2008 Pew Research Center Survey found that in 43% of all couples, the majority of decision making is done by women. That is to say, if a woman calls your business and asks for a quote, chances are that she will be making the decision to hire you or not.

The times have change, but the decision making in a household has not.  From which company to invest, how much money to save, or where to go on a vacation, women are the decision makers in a family.

In the United States, the similarities are the same.  Financial decision making is mostly a woman’s role.