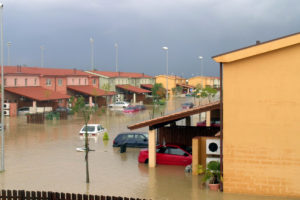 If hurricanes Irma and Harvey have taught us anything is the fact that natural disasters can occur quickly, and with disastrous consequences.  Hurricanes in the United States are commonplace, specially in Florida and the coastal regions of the country.

With the hurricanes or heavy rains, flooding is a natural disaster that can occur to any of us.  Flooding can affect people in  every state, and is one of the most common natural disasters in the country.

As homeowners, we cannot control the occurrence of hurricanes, nor  predict the severity or the financial implications that come along with those disasters, but we can help our homes and our financial stability  by ensuring that we do have flood insurance for our homes.

If you have homeowners insurance, it does not mean you have flood insurance.  Make sure you buy it separately through your home insurance agent, so you know you are protected.

According to the Federal Emergency Management Agency (FEMA) one inch of water in your home can cost you more than $20,000 in damages, why risk not having flood insurance coverage?

For more about this and other topics, follow the links below.

What Flood Insurance Does and Does Not Cover

Hurricanes Irma and Harvey puts renewed attention on the policies. Here’s what you need to know.

The devastation from Hurricane Irma is far from over, but property owners in Florida—as well as those who faced Hurricane Harvey in Texas and Louisiana—are already facing the daunting task of rebuilding.

Beyond the human tragedy, the widespread flood damage caused by the storm serves as an important reminder to homeowners in the region—and around the country—about what is covered by insurance and what you need to know about protecting yourself.

As most property owners know, homeowners insurance doesn’t cover flood damage. But even in Florida, Texas and Louisiana—where many people live in coastal areas—only about 20 percent have flood insurance, according to a study by the Washington Post.

About 80% of Hurricane Harvey victims do not have flood insurance, face big bills

NEW YORK – Homeowners suffering flood damage from Harvey are more likely to be on the hook for losses than victims of prior storms — a potentially crushing blow to personal finances and neighborhoods along the Gulf Coast.

Insurance experts say only a small fraction of homeowners in Harvey’s path of destruction have flood insurance. That means families with flooded basements, soaked furniture and water-damaged walls will have to dig deep into their pockets or take on more debt to fix up their homes. Some may be forced to sell, if they can, and leave their communities.

All these people taken out in boats, they have a second problem: They have no insurance,” said Robert Hunter, director of insurance at the Consumer Federation of America.